Who is Savannah King?

Savannah lives for the song in the journey.

A fast moving, adventure seeking life on the road in her 1987 Ford Coachman camper van provides just the inspiration. The road brings the stories and the music showcases the wisdom only experience can provide. By honing her live sound, Savannah brings her alternative folk sound at its very best to every performance. This has garnered the attention of artists such as Emmylou Harris, 10,000 Maniacs, Harpeth Rising, Ernie Halter, and award-winning Canadian country music singer-songwriter Ryan Cook, as well as a performance with the Buffalo Philharmonic Orchestra.

Savannah has completed six successful solo tours, become a New Folk Songwriting Competition finalist, a Wildflower Al Johnson Performing Songwriting Competition Finalist, opened for Emmylou Harris, and toured with two-time platinum selling artist 10,000 Maniacs as a harmony vocalist and rhythm guitarist. In September of 2018, Savannah successfully raised $8,400 in under 30 days through her first Kickstarter Campaign. The campaign funded the making of her 2nd full length album in Nashville, TN. The new album, Cliffrose, is a musical narration of traveling the American Southwest desert through forest service roads and remote adventures. The 9 song album and accompanying book was released in March 2019 to high acclaim. Two songs from Cliffrose then earned Savannah a spot as a finalist in the Al Johnson Performing Songwriter Competition where she traveled to Texas to perform. 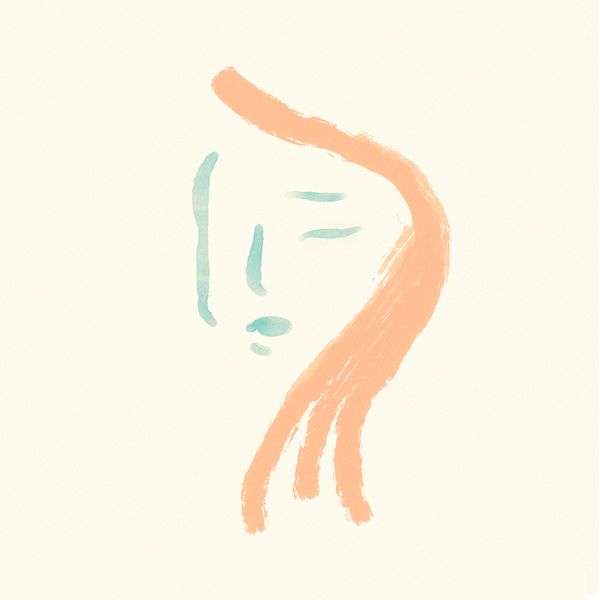 MOAB IS OUT NOW!

My new EP 'Moab' has been released into the world! You can listen on all streaming platforms wherever you get your music. Moab's artwork was painted by Heidi Nielson from Desert2District

🔊 Why wait any longer? The first single from my new EP is called Sweetest Dream. You can now pre-order the digital album on Bandcamp: https://savannahkingmusic.bandcamp.com/releases

Hello friends!
I have a huge announcement!
My new EP 'Moab' will be out May 20th on all streaming platforms. There are three songs on this EP that I wrote during a brief time parked out in the desert in… 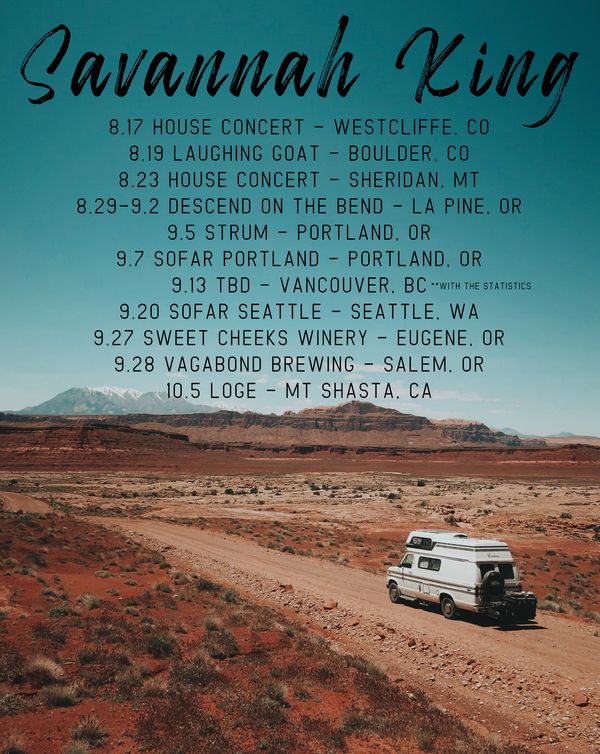 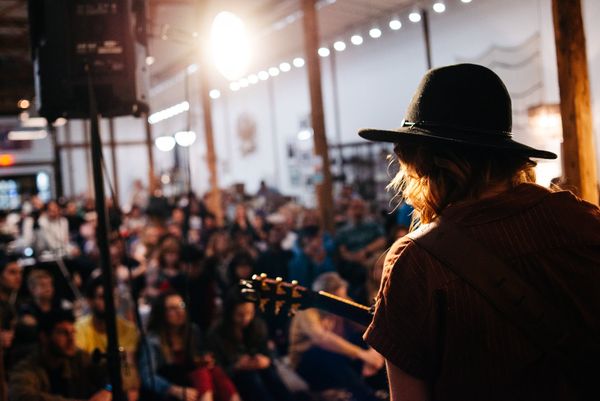 Hello friends!
I'm putting something out into the world that I've been debating for a long time. That "thing" is my Patreon.
I've decided to start a Patreon because everything that I've accomplished so far, I've done so without a… 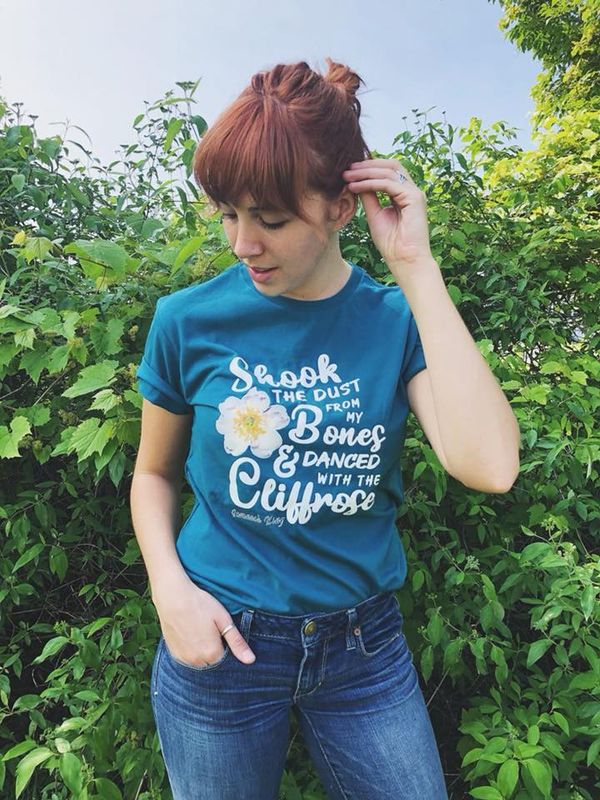 Cliffrose T-Shirts are now available to purchase through the store page on this site (& you may recognize those T-shirt models ?)!
Online sales of books & CDs have been so incredible, and to show my gratitude, I wanted to… 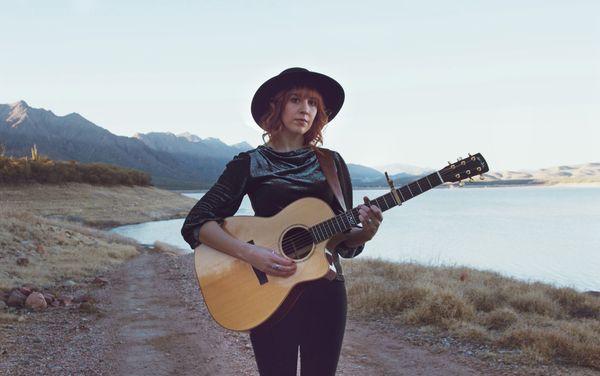 ”You can celebrate every day, just because you woke up to take another breath. You don't need a greater reason than that.” 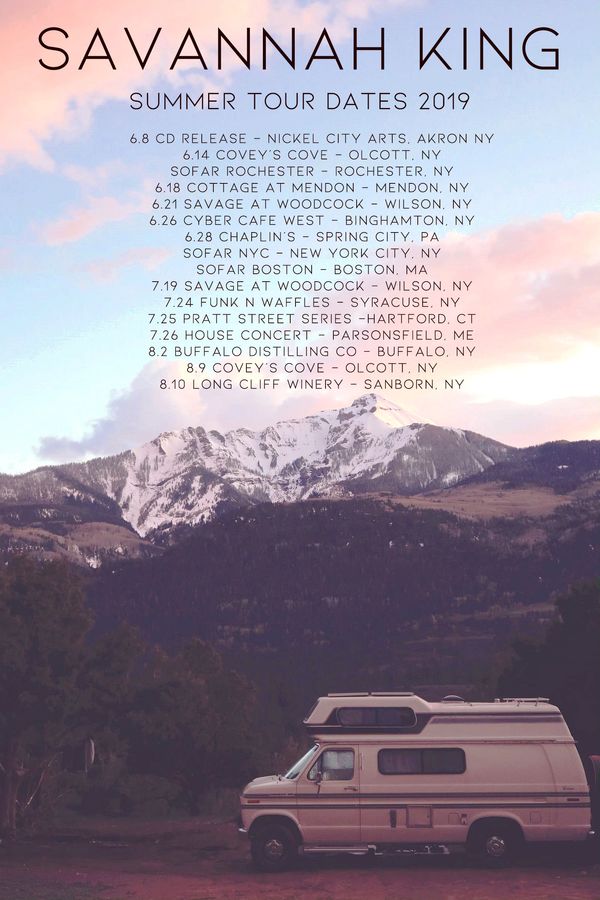 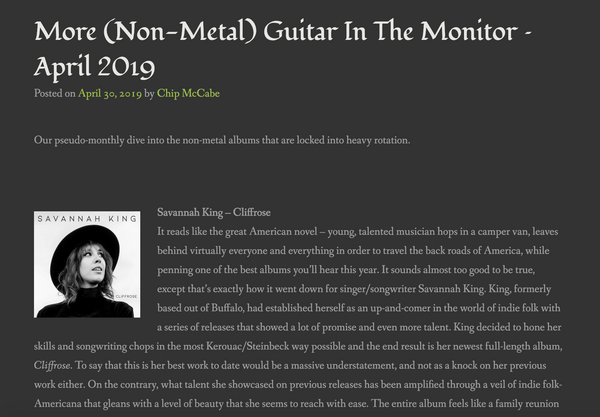 “It reads like the great American novel – young, talented musician hops in a camper van, leaves behind virtually everyone and everything in order to travel the back roads of America, while penning one of the best albums… 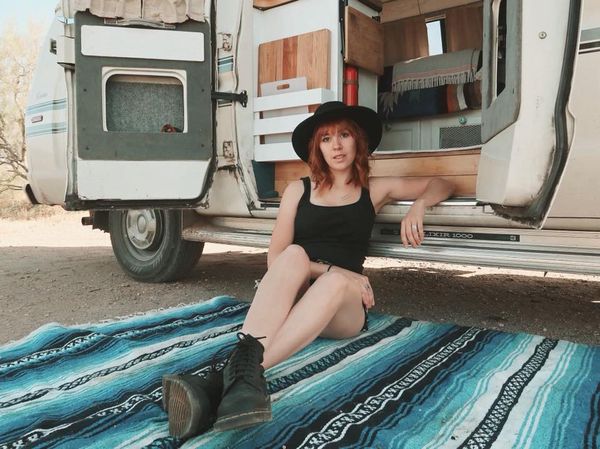 I am so excited to announce that I have been chosen as 1 of 10 finalists for the Wildflower Al Johnson Performing Songwriter Contest.
‘God Was Good To You’ & ‘Fresh Start’ from my new album were chosen…

I did an interview and performance for KJZZ Phoenix the local NPR station. Thank you to the whole team at KJZZ especially Kaley Monahan and Scott Morrow for making me a part of their Tiny Desert Series. 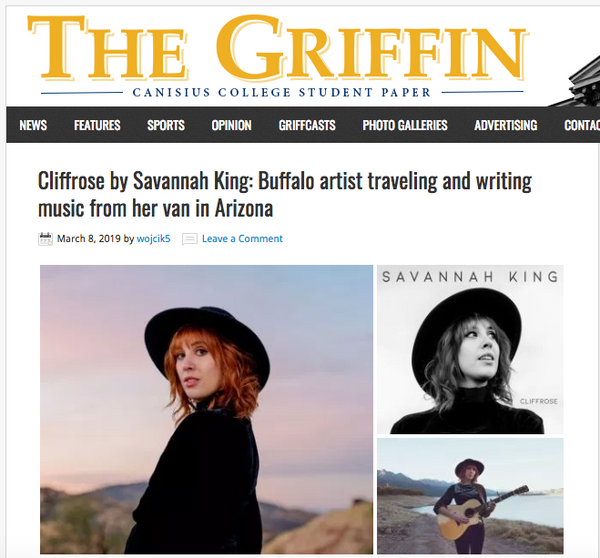 Savannah was featured in The Canisius Griffin for her release of Cliffrose. Thank you to Abby Wojcik for all her work on the article! Read the article below: 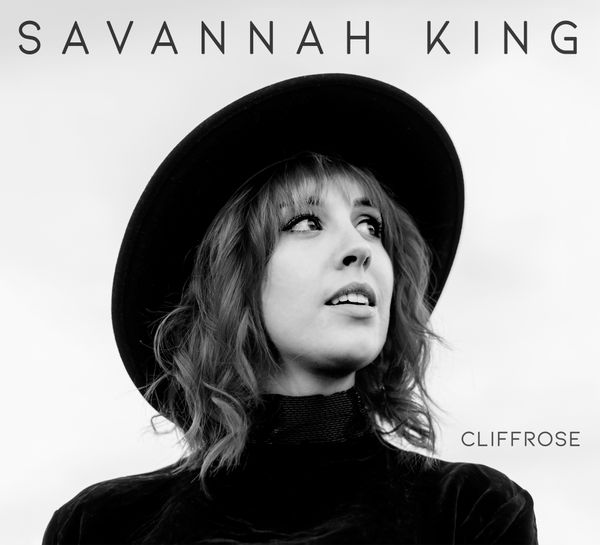 Savannah's newest album Cliffrose is out now! Physical CDs and books are available for purchase through our Store page. You can listen to the album on iTunes, Spotify, and anywhere else you stream music.

Here is an exclusive first look at a song from my new album! Confetti is by far the heaviest song on the album, but it is also one of my favorites.

Cliffrose iTunes Pre-Order is live today! You can pre-order the album and have it delivered to your iTunes on the day of it's release! Follow the link below! 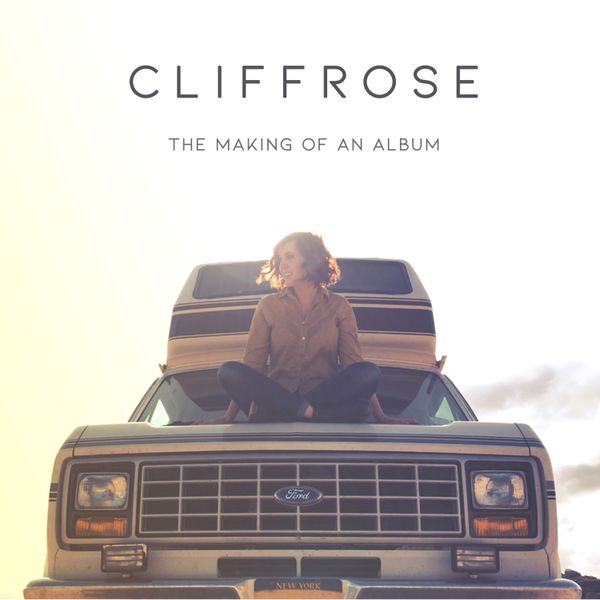 This has been a long time coming, so I am beyond excited to officially announce that I am publishing a book in conjunction with my new album called "Cliffrose: The Making of an Album".

When I was making this…

Savannah announces the name of her new album: 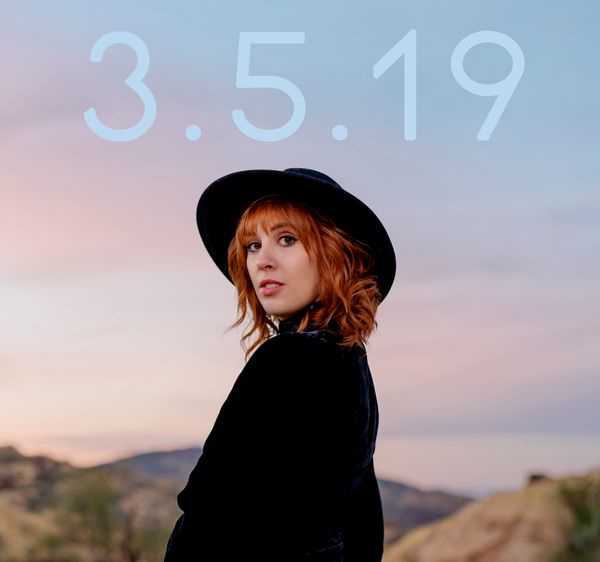 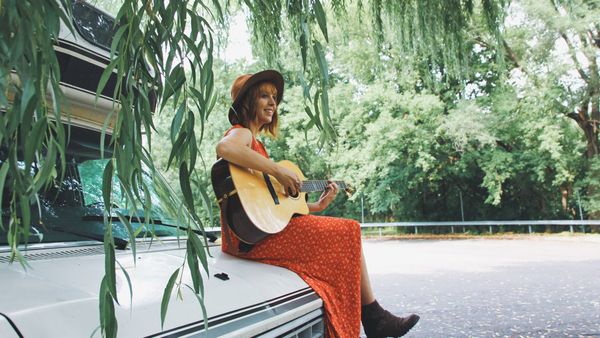 We are fully funded!! The album has been successfully funded at an incredible 103%!! That means we not only reached the goal, but surpassed it! Thank you from the bottom of my heart to the 70 backers who put their…

Cliffrose is a song that came out of our time in the West - it will also be on my new album that is being funded through Kickstarter right now.

So here’s a little sneak peek into a live… 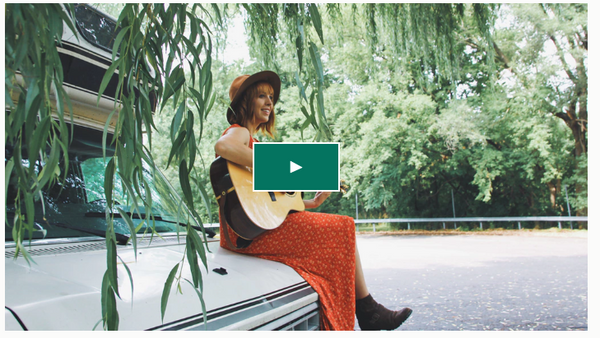 Today I start the funding for my next album. I have been waiting for this day for quite a long time, I can't believe it is finally here! Watch the video above or visit my Kickstarter page for…

A new video live from Seaward Studios in Los Angeles, CA! Savannah covers Crazy, written by Willie Nelson and made famous by Patsy Cline. Thank you to Pat, Alec, and everyone who helped bring this little video to life!

We went out into the desert and recorded one of my brand new original tunes, Little Song, live from the van. Im gearing up to make a new record and hearing these tunes recorded so intimately from my little home… 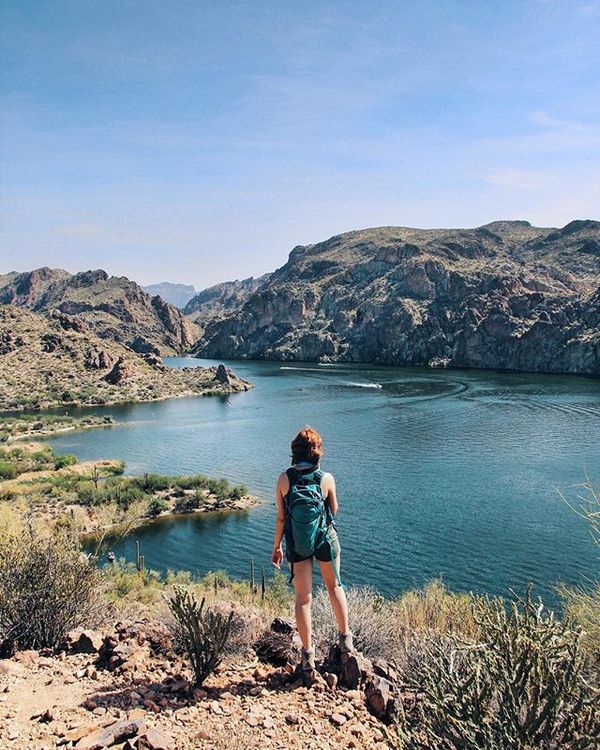 After lots of hiking and desert exploring (see above photo), I finally went indoors last week to talk to my friend Colton Berry from Proud To Present Podcast about my music, my favorite ice cream, and what’s up…